Disentangling the halls of higher education

Seattle Central has a notoriously confusing campus. A labyrinthine layout, crowded halls and a multilayered system of signs spread out over 10 buildings and 100 years do the community a disservice. With this project I endeavoured to create a simple and scalable signage system. Come with me on a journey into the Kafkaesque realm of low budgets, inconsistent labels and the madness of doors. 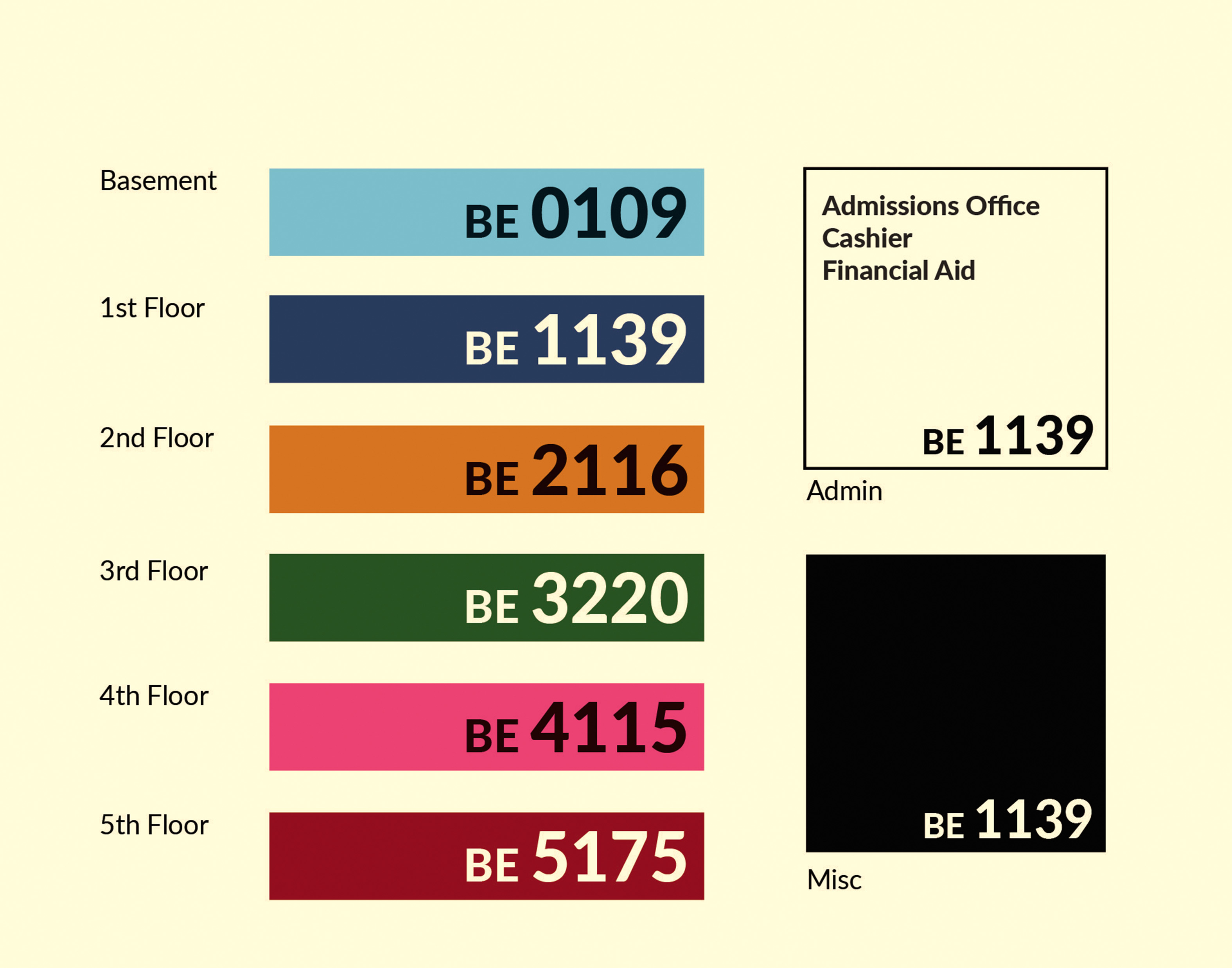 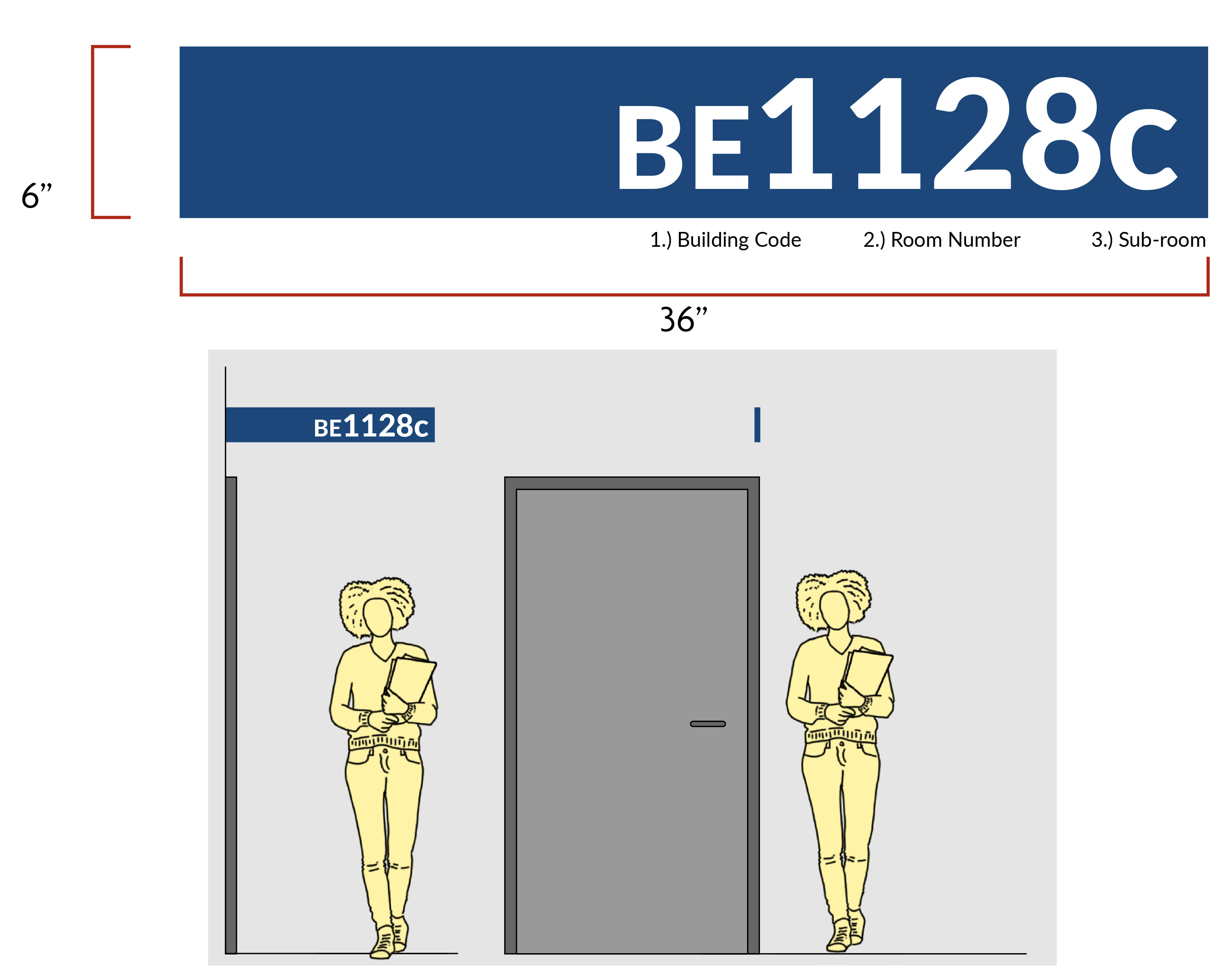 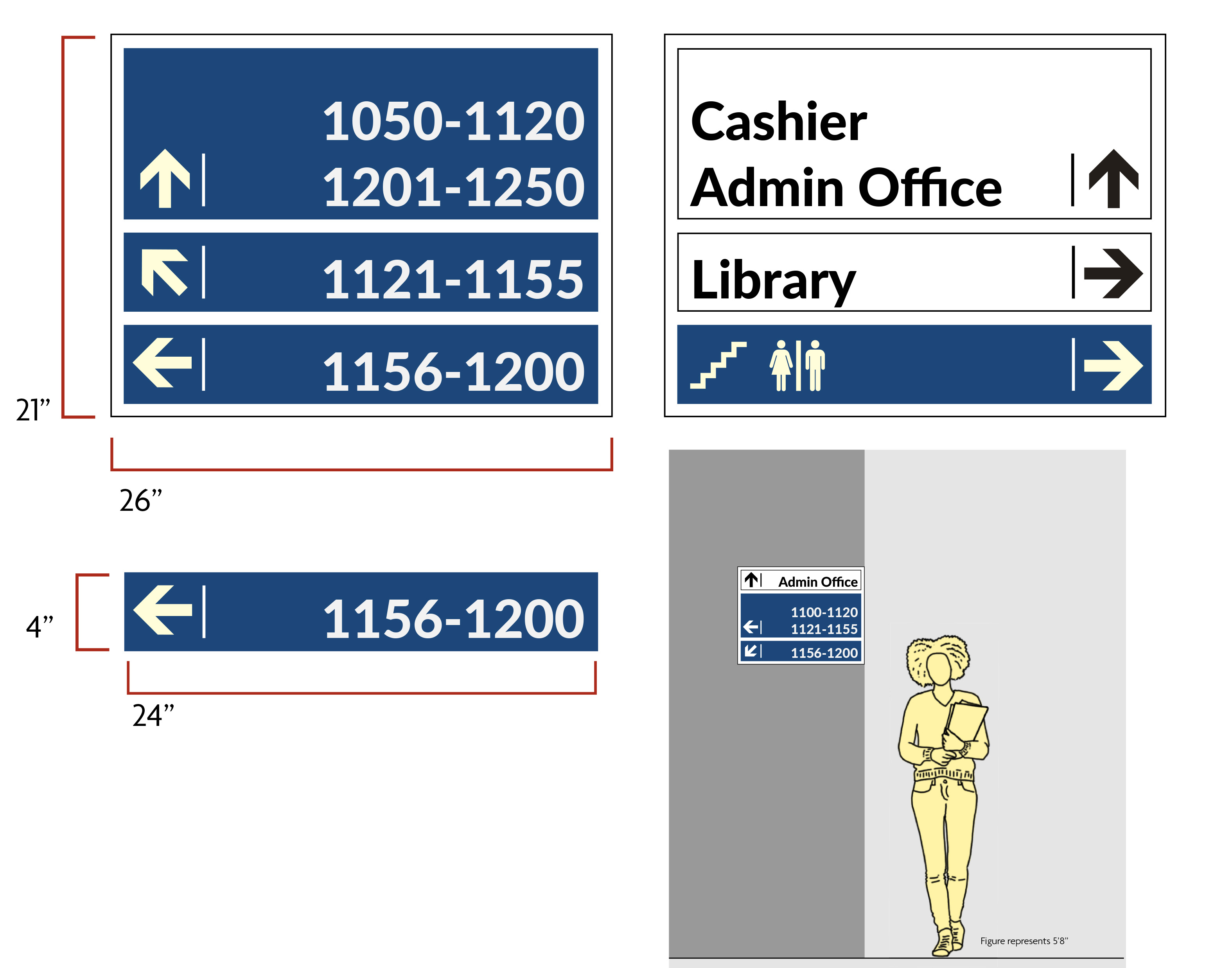 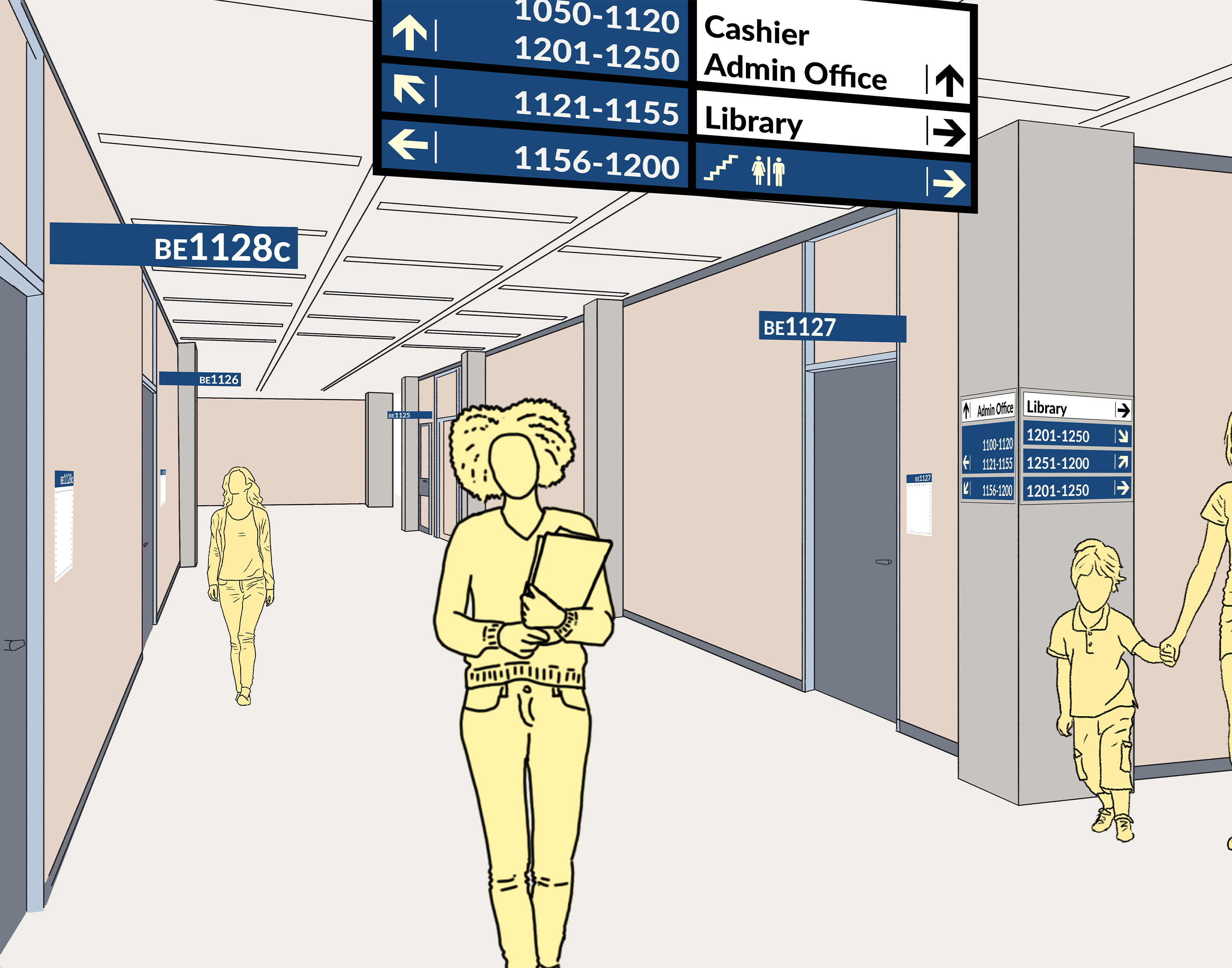 Seattle Central College has a signage and wayfinding system that has been reworked and added to in a patchwork fashion over several decades. This has resulted in a confusing and inconsistent system across multiple buildings. Crowded hallways and posters placed on the walls clutter sightlines. Students and even Staff have a difficult time finding rooms. This problem is compounded for students for whom English is a second language. How can we make a single system that clearly marks each room, and lets users know where they are?

My first step for this project was to figure out the scope of the problem. When I proposed this project to my teacher and program leaf, Marc Salverda he gave me access to a 2013 audit performed by a studio called Ilium. The audit proposed reprinting the signs around the school with a total price tag of just over 1 million dollars. The school declined this proposal, as it exceeded their price point. While a full price break-down of my system was outside the scope of this project, it was something I kept in mind, and gave me some context when I looked at the solutions the school had been using instead. I wanted to document the current system, and see if what could be retained, if anything. The school being fully remote due to Covid-19 presented a rare opportunity to photograph the halls and rooms without the usual throngs of students. I took over 200 photos of the main building on campus, the Broadway Edison building, and found that there where about 3 or 4 different systems in use throughout, and that in many cases, teachers had posted signs of their own, scribbling class numbers or directions on printer paper or sticky notes and placing them on the walls.

Even though I was a student at the time, it was news to me that SCC has 10 buildings, eleven if you include the parking lot. Rather than redesign every building on the campus, I decided instead to tackle the biggest, thorniest problem first. The Broadway Edison building (BE for short) is where about 60% of all classes take place, it has the most floors at 6, and by far the most rooms. It also has a truly baffling layout, with the first floor being split into two levels, and floors 2-4 having a figure-8 layout. If I could design a system that fit this building I the rest would be easy.

I wanted to tackle the issues of floors first. Currently the BE building has entrances on all sides, but primary entrances on the east and north sides bring you on a level higher than the west and south entrances. The college has labeled both of the ground floor entrances as the first floor leading to an interesting situation where one can be in a first floor room that is directly above another first floor room. Step 1 was changing the lower level, the one with the west and south entrances to the Basement level (B). I also wanted to make sure that no matter where you were in the school you could quickly tell what floor you were on. I gave each floor a distinct color using the school's basic blue as the starting point. The colors are very saturated but I made sure to adjust them so that white or black text could easily be read at a distance. All signs on a particular floor would use this color scheme, and all floors across the different buildings would share a color. In addition, I reserved the colors black and white for special rooms on the floor, White for admin rooms, libraries, help desks, any room that a student might enter that wasn’t a classroom. Black was saved for supply closets, utility rooms or other places that a student shouldn’t enter, like the boiler rooms or elevator rooms.

Next, I moved on to type. I knew that typeface had to be readable at a distance, and that I would be relying on its numerals more than anything else. I chose Lato, a good boring type face with distinct and readable numerals. With that chosen I needed a system for displaying the room numbers. One of the problems on campus currently is that sometimes there are rooms with the same number, that are in different buildings. Technically each room on campus has a building code prefix, but it is rarely displayed around the school. Additionally, there are rooms that are only accessible from within another room, typically (but not always) these rooms are given a letter suffix. So a room in the BE building might have the full code of BE-1107-A but only have a sign that reads 1107. I wanted every sign that would be visible in the hallways to have each room’s full number. So, I chose to display the building code first in all caps, followed by the room number, and finally any sunroom letter, in lowercase. The building code was 75% the size of the room number, while the sunroom suffix remained unchanged. All would be displayed in the heavy weight of Lato. Symbols would also feature wherever possible, not wanting to over complicate things, I use the AIGA standard symbol set, the same kind used in airports.

The last step was make a family of signs to display this information. Since the halls of the school are crowded between classes, obscuring sightlines, and because the walls are frequently covered in club posters, class advertisements, and other material typical of a large school, I wanted all my signs to be well above the crowd. The first sign I built was a hall sign for each room. It would be a 3 foot long piece of acrylic or thin plastic that would extend out into the hall from above the door frame using the floor’s assigned color. At 6 inches tall it also has plenty of space for large text. The room number would be just shy of 4 inches tall, making it legible from more than 100 feet. To partner with these signs, I also made a small plaque to be attached to the wall near the door handle. This sign would have the room number again at the top, and then a clear cover over a slot that can fit a standard 8.5x11 sheet of paper. This would allow the school admin or teachers to post notes or schedules outside the room.

There also needed to be some larger navigation signs for crossroads, elevator landings and other decision points. For this I designed signs that largely follow the schools existing hanging signs. Mine are made of of blocks, so that all the items that would be reached by the same route from this sign are snapped together. Again color is use to distinguish between different floors and special rooms. Given that not all halls have the space for larger hanging signs, I made a scaled down version that could be fitted to corners.]

During this project I reached out to the school admin for any additional insight, but correspondence was brief and spotty, I suspect largely due to the added stress of Covid-19. There is still much more that could be done on this project, like a renumbering of the school’s rooms to be more logical, an interactive campus map and more placemaking, but without more support from the school, particularly on the topics of potential budgets, I’ve chosen to pause work for now. Given my own personal involvement with the school this is a project I would really like to continue though, it's a gnarly problem, and schools deserve more resources. Maybe someday after classes resume I’ll get that opportunity.