Product design to get you outdoors

A hypothetical startup in Seattle wants to get young professionals out into the mountains and forests around the city. To build confidence and trust I built a frictionless system of pre-packed trips around western Washington. To appeal to the young urbanite user base, I branded this system to tap into a sense of escapism and wanderlust. 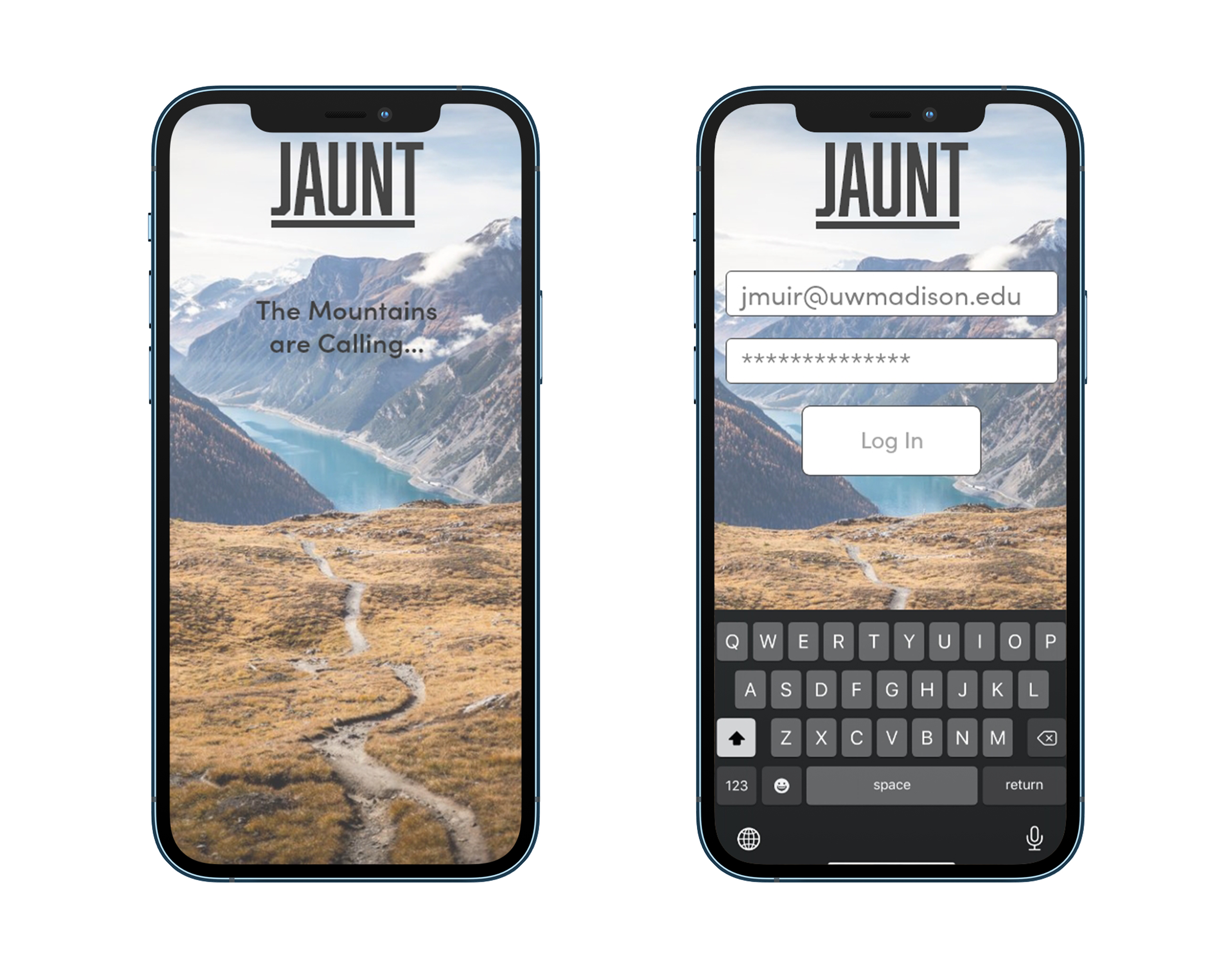 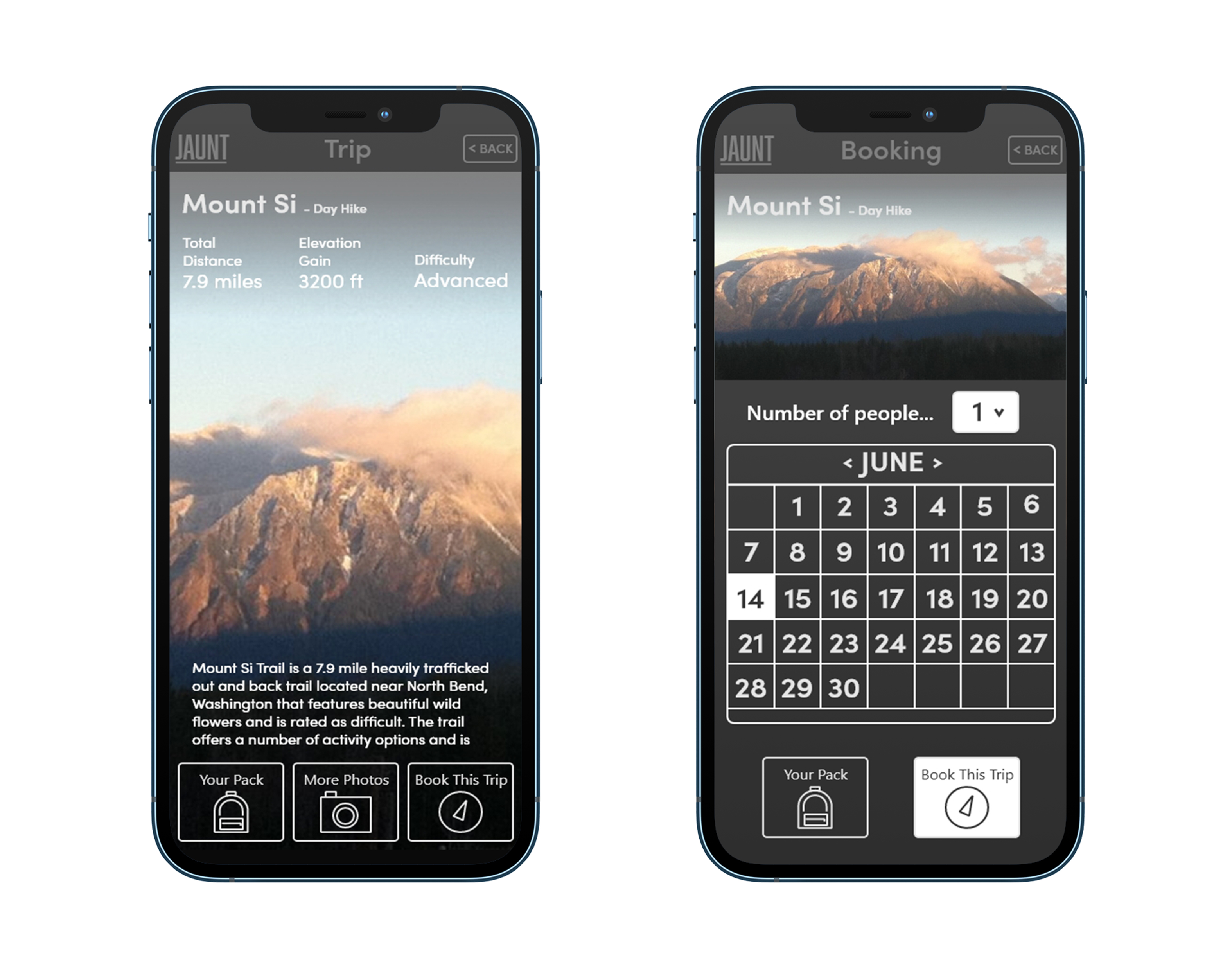 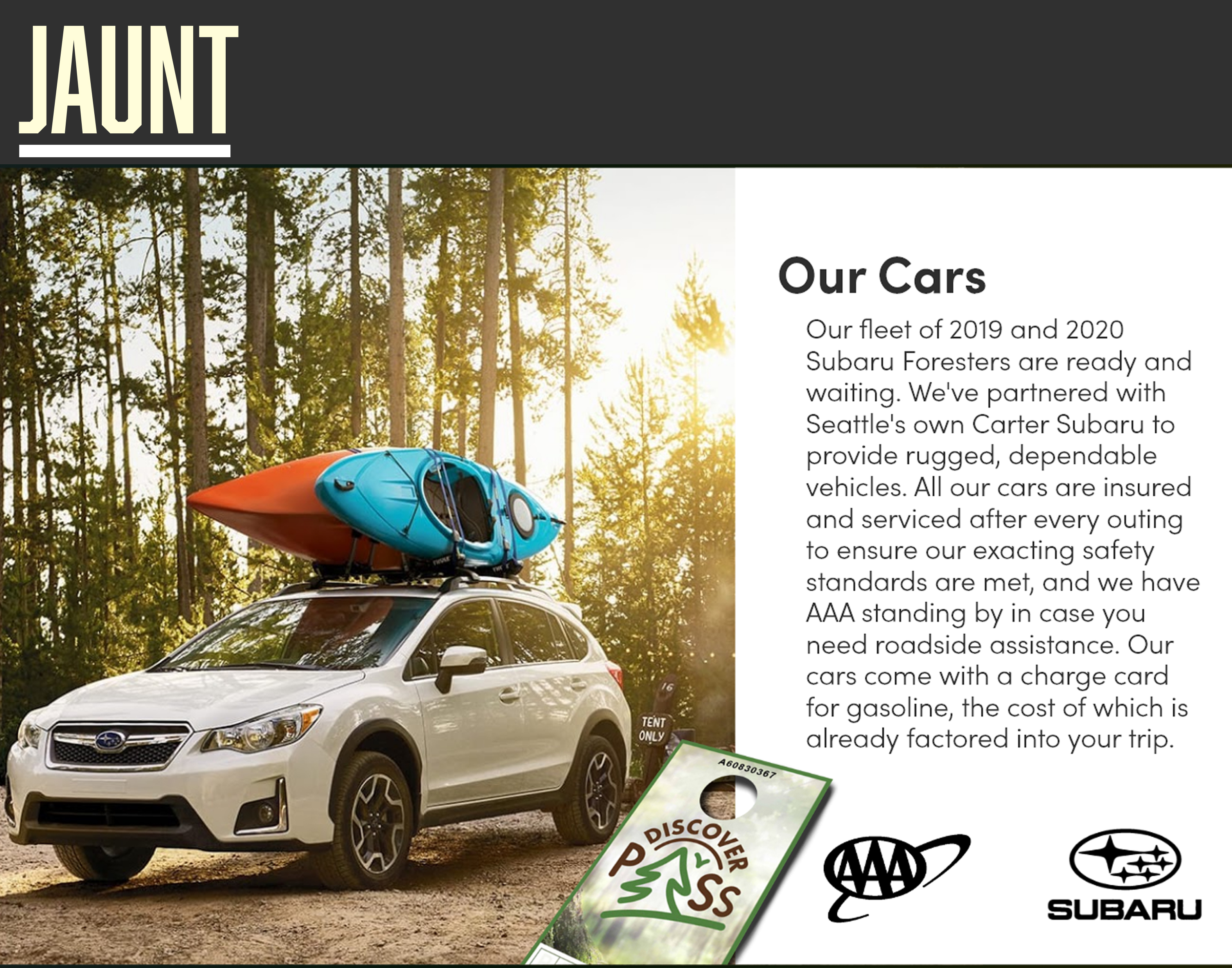 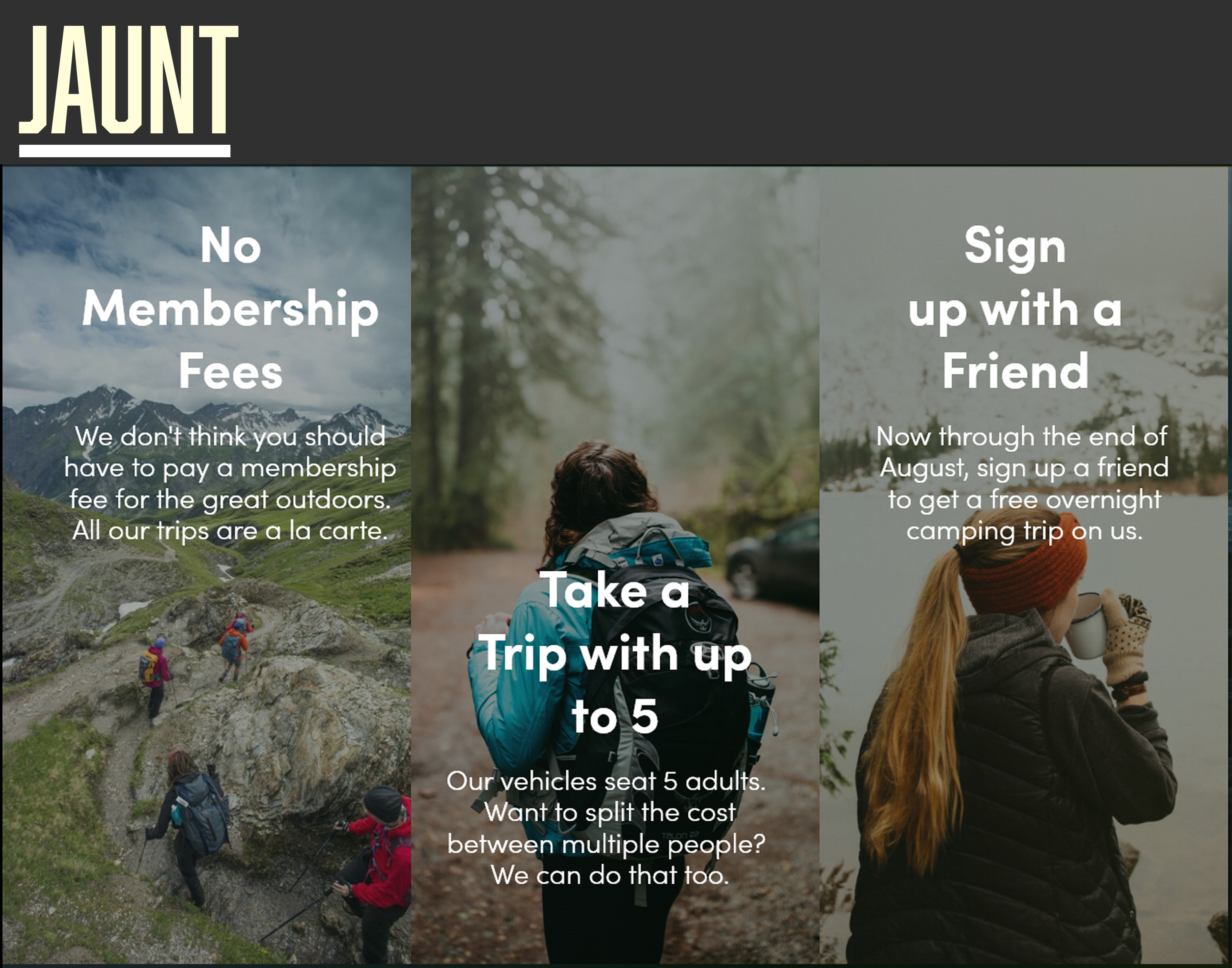 Young professionals in Seattle and other urban centers around the PNW fantasize about getting out of the city and into the wilderness, but many either lack the equipment, or the confidence to embrace the outdoors. How can we build a system and a brand that gives these hopeful adventure seekers the confidence and the means to get out into the mountains.

I must admit to quite a lot of bias here, as having worked in the Park Service, I felt very comfortable throwing a sleeping bag and some supplies in a truck and running off to the mountains for a weekend. At the start of this project, I sat down and rattled off some possible solutions, then went to run them by some people in the appropriate demographics. I quickly learned that my idea of “Entry Level'' was anything but. Anything I designed had to be easy to use, and crucially, safe. A number of people mentioned that they wanted to try camping or backpacking, but they were afraid they’d forget some vital piece of equipment out of ignorance.

One interviewee said, “I want to go camping but I don’t own a helmet."

So I scraped my first ideas and got back to the basics. I thought I’d try some comparative analysis but to my knowledge there weren’t any companies offering this sort of service. I looked into renting camping equipment, but most of the companies I found were plagued with poor reviews complaining about the quality of the items. There was one exception, REI, whose reputation carried them above the rest. If I could partner with REI, I could alleviate fears of equipment malfunction, and piggyback off their reputation as an added bonus.

Car rentals also proved to be a little tricky to compare. There are a number of rent-by-the-hour services like Zipcar and Car2Go operating in Seattle, but while their app based system is convenient, their vehicles aren’t something I’d want to take up a mountain. More traditional by-the-day rentals have a wide selection, but having to get to a rental office is a hassle. I endeavoured to combine the best of each system.

We could partner up with a trusted manufacturer. Small city cars were out of the question but huge pickup trucks were too far in the other direction, and our urban user base might be intimidated driving some massive vehicle. Surabu was a happy middle ground with their Outbacks and Foresters. If the gear was already coming from REI, why not make the pick up location for the car, prepacked with all your gear, the REI parking lot?

The question remained though, what would the user actually be purchasing or renting. I decide on pre-packed trips for a two reasons. First, it lets us offer more than just car and equipment rent, but not so far as to compete with guided trips and tours. Second, it lets us get around the user’s ignorance about equipment. If the trips prepacked we can give them a suggested itinerary and all the gear they’d need. It eliminates choice, in favor of convenience. User’s would pick a date and trip from a “Menu”, and then our company packs a car with a baseline kit and any additional material they would need for their selected trip. With the broadest strokes of the system laid out, I moved on addressing the sense of security users wanted.

I started with a list of all the things I could think of that could go wrong on a trip, and then asked around until I stopped getting new answers. Broadly speaking, the issues fell into 3 main camps; Car Trouble, Medical Emergency, and Equipment Malfunction. From there I went about finding solutions, and back up solutions to address each. I reverenced backcountry instructions from wilderness trailheads, as well as guidelines set up by the Parks Service, both were a bit overkill for the intended scope of this system, but better safe than sorry. Every car would come with a first aid kit, an emergency satellite phone, and a user guide for any equipment rented, like tents or camelbacks. Next was on to the visual style of the Brand.

I decided to let photography take the lead for two reasons. First, the PNW is full of beautiful scenery and stunning vistas, why try to cover that up? Anything I put in the way of the natural beauty would detract from the escapism. Second, I wanted to highlight people in those natural landscapes. Instagram is overflowing with people posting images of their hikes or their cabin retreat. If I could port over the trappings of that style of photography, users would think to themselves, “I can go there, and get some beautiful photos to add to my story.”

With that goal in mind, I selected moody photos, frequently taken near dawn or dusk, and applied some light filters and color washes. When I included people in the photos, I tried to have them be shot at a distance, facing away from the camera, so that the focus was not on the person's face, but the natural space they were occupying.

Color: I wanted both type and color to be functional and not detract from the photography, but not be completely devoid of character themselves. Green was always going to be the anchor color that I built around, but I didn’t want it to be the most abundant color. I brought in charcoal, and desaturated browns that matched the tones in my photography, which left me with a fairly cool, somewhat dark palette. To add a bit more variety I add a yellow as a highlight to draw the user’s attention to specific elements.

‍Type: To help the text stand out, I made it a pale grey. To make it readable on small screens I chose a slab serif. This also had the added benefit of lining up with many other outdoor brands. This decision would later inform the wordmark, where I pushed the blocky, rugged look even further.

Layout: Again, since I was leading with photography, my layout needed to not draw attention to itself, but rather highlight the photos. I also knew that the majority of the time, users would be interacting with my brand on mobile screens, so tall and narrow. To give the photos as much space as possible I went for a borderless grid. In functional areas, like viewing your transaction history, the grid was uniform and straight laced, but in other areas, I used size and shape to entice users to check out items of interest. Popular hikes, or new offerings for example.

The name was actually one of the last things to come together for this project. I knew nearly from the beginning that I was going to be building an app, and I wanted whatever system I built to have a simple, easy to remember name. Names like AirBNB and Car-2-Go work well enough, and crucially, inform the user about their function, but everyone knows that truly successful app brands achieve verb status. “I’ll Venmo you,” “Google that,” “Slack it to me.” I wanted the name to be a single word, and for it to be inviting. I’d like to say I had a flash of inspiration and settled on the name all by myself but in truth the eureka moment came by going to the thesaurus and looked up synonyms for “trip.”

Jaunt /jônt/ noun
a short excursion or journey for pleasure.